SCRIPT-WRITING started for me after I signed up as General Manager at the Adam Smith Theatre in Kirkcaldy, when they pointed out that my contract included the writing and production of the annual pantomime. Two of my pantomime scripts - a version of HUMPTY DUMPTY for a young Joe Pasquale, and a ROBINSON CRUSOE built around the Fife-born Alexander Selkirk rather than Defoe’s largely-fictional character - were published commercially and are still available.

During a long stay in France I completed two more scripts: an alternative to pantomime CASABLANCA HERE I COME (an homage to early black and white movies developed around the plot of Dick Whittington - still awaiting its world premiere), and a stage adaptation of Christopher Rush’s charming book  A TWELVEMONTH AND A DAY about growing  up in the Fife fishing village of St Monans, staged in 2006 by the enterprising Dollar Drama Group with generous  assistance from the Scottish Arts Council.

Partly autobiographical, Christopher’s book covers the twelve months of the fishing year alongside the first twelve years of  the boy’s life. A large cast, with most playing several roles. Two lads play ’the boy’ aged six and twelve. Plenty of singing, and several opportunities for pianists.
“A revelation of a time past; the emotions of everyday life, love, humour,  and sorrow are carefully woven into a complete portrayal that would touch any and every heart”.

LETTERS FROM THE HEN HOUSE

Encouraged by my eight tours of the Indian sub-continent, and by a comment that I didn’t write many good roles for ladies, I invented this piece of theatre about the British women in India during the Raj, largely put together from the letters, diaries and biographies of the ladies themselves.

They all depart for India in 1835 and return after Independence in 1947, retaining their names and characters throughout but changing clothes and hairstyles - and sometimes attitudes - with the changing of the times, and of the Viceroys.
Six ladies and only four men.
A set suggesting the deck of an 1835 sailing ship.

Some time after the event a Stratford upon Avon vicar wrote in his diary that Michael Drayton, William Shakespeare and Ben Jonson enjoyed A Merry Meeting at the Bell Inn in Welford a few nights prior to Shakespeare’s death from a chill ‘supposedly caught riding home in the rain from this very meeting’.

Our play imagines what might have happened during that wet evening in Welford, incorporating the few known facts amongst a great deal of theatrical speculation.

A single set: the parlour of the Bell Inn. Seven characters: the three writers; the staff at the Bell Inn (landlady, potboy and wench), and another customer, Tolly, whose presence appears ‘unsettling’.

I was asked for a Murder Mystery suitable for presentation in non-theatrical venues such as function suites or restaurants, so I set it in a Bingo Club. The patrons are seated at tables, and well into their second game when a scream is heard: a body has been discovered in the gent’s toilet.
A police inspector arrives.The Bingo Hall staff are the main suspects, and their personal foibles and family problems are soon exposed by his questioning.
Some venues served a meal in the interval, with dessert/coffee during the short Act Two break.
A Bingo machine of some sort, however basic, is necessary.
Four men; four ladies - plus a ‘plant’ in the audience. 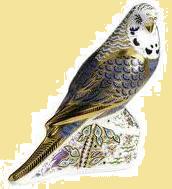 Director and cast are attempting to record a Murder Mystery vaguely reminiscent of The Maltese Falcon despite delays caused by the late withdrawal of a cast member and technical problems with the sound equipment, not to mention a certain animosity between two of the principals.
Clearly someone is trying to disrupt the production, but who? And why?
4 ladies; 9 men - several play more than one role. Basic setting: a BBC Radio Studio although the final scene benefits from a full stage set representing a not-too-realistic Pet Shop.
The plot was suggested by a news item in a Scottish paper, and the play started life as The Montrose Budgerigar. It could easily adapt to any local setting. 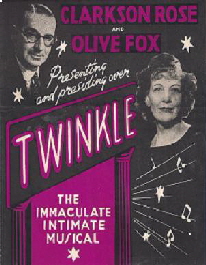 SEE YOU IN HEAVEN - a musical

Clarkson Rose and his partner Olive Fox staged their first TWINKLE summer show on Ryde Pier in
1921. They did resident summer seasons with spring and autumn tours throughout the next forty- seven years. Twinkle was the main Eastbourne attraction from 1935 until war closed their Pier Pavilion. By then Clarkie and Olive had set up home in the town, where Clarkie’s doctor was the notorious John Bodkin Adams - alleged to have eased the passing of perhaps 140 of his elderly female patients.
SEE YOU IN HEAVEN tells of the arrest and trial of Dr Adams within the format of a Twinkle-style
end-of-pier show, with songs, dances and sketches including reminders of some of the better- known variety performers and their classic routines from that period.
Younger dancers (The Rosebuds); otherwise quite a mature company including several patients of
Dr Adams (The Faded Roses?). Plus, of course, a small band in the pit.
nb: amateur rights for this production are not yet available

Award-winning adaptation of a Christopher Rush short story involving suspected witchcraft.
Set in the vestry of Kilrenny Kirk in Fife in the 1960s.  5M, 2F

Adapted from Colin Hough’s hilarious Radio 4 comedy. Cabaret entertainer Eddie is ’looking for lurv’, but is he looking in the right place?
Skeletal settings. 2M, 3F. Voices off, including dog.
‘Confidently written and engaging’.

Adapted from two Emile Zola short stories: Coqueville On The Spree and Shellfish for Monsieur Chabre.
All set on locations in southern Brittany.

A free cinematic adaptation of Christopher Rush’s much-acclaimed novel WILL, his fictional biography of William Shakespeare dramatising a life split between Will’s Stratford and London families.
nb: performing rights for this adaptation are not currently available.